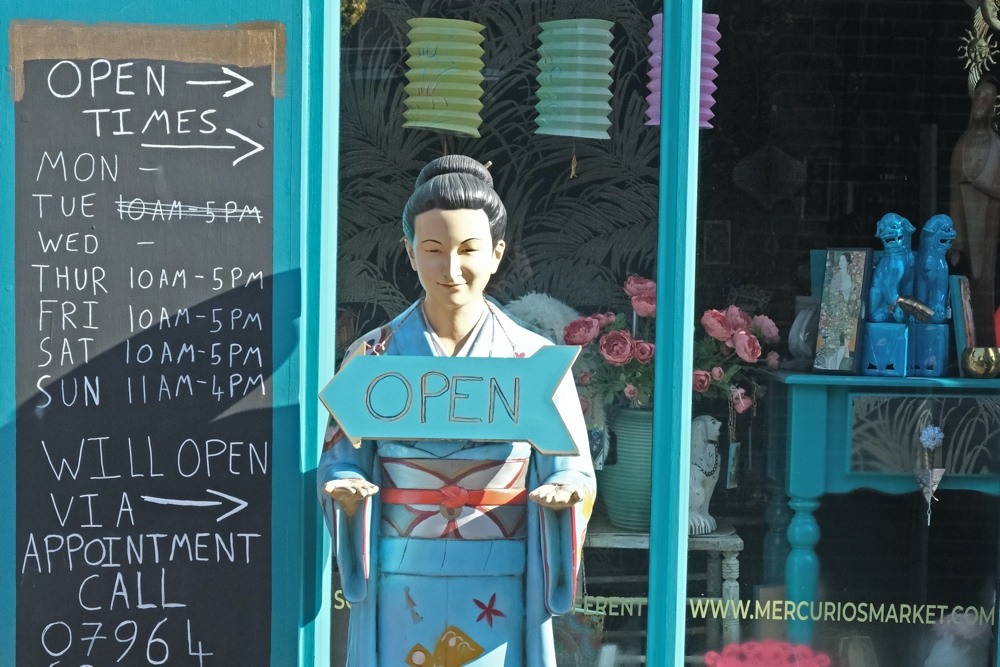 What’s my place like? Eclectic, that’s what I’d say. There’s a lot of art as well as vintage stuff, ethnic goods, religious icons – it’s a curiosity shop, that’s how I’d describe it, a bit different. I’m not really religious, it’s more inspired by the household I grew up in, my mum’s sense of interior design. I think that’s where I get my interests, and I’m a bit of a creative type, as well.

It took us a month to decorate in here before we opened. Our landlord is really nice. We painted it inside and out. I’d thought it all through before we started. You have to think how it’ll work as a whole package – the idea was to make something really striking and atmospheric in a small space. It’s my own style, really, and it’s what works with the stock and shows it off best. The decorating does make a difference. Some people come in, not necessarily even to buy anything, but just because they’re interested in the design – they get ideas for their own houses.

I chose to open on the Underbanks because it seemed like there was something going on here – there’s a lot of potential, with the architecture and the new businesses. Having all these interesting, quirky independents is what makes the Underbanks unique. It’s something different from the high street, and I think that’s what people want, to be honest – they’re bored of seeing all the same chains everywhere.

I’ve been here for about six months now. I started off selling stuff online, but this is my first shop – it’s family-run, but it’s mainly just me in here. The rent is pretty cheap around here, I think because the area isn’t quite there yet, but that helps startups like me a lot – you can give it a go, take a risk. It’s good to have the opportunity to try something different. The businesses that started since me seem to be doing well, and there’s new places opening all the time, so it’s a big change from years ago.

I definitely came at the right time, now Underbanks is on the up. Until recently it feels like it’s been neglected a bit, so I’m hoping the council pump more money in to really improve it. If the independents are taking the risk to open here, I think the council should take a risk too. I’d like them to get rid of that building over there, I think that’d bring more footfall. It’s pretty ugly, for one thing. But it also means we’re hidden away a bit, even more than Little Underbanks, because people just see that building and walk past.

For me the front window is what sells the shop, and people can’t necessarily see it properly right now, going past on their phones or whatever. That statue there normally goes outside. From the main street you can’t miss her, so people think, What’s going on there? Because we’re behind this big wall, we have to come up with ways for people to see us and know we’re here. I found her online, I think she would’ve stood outside a restaurant before, holding a serving tray. She does look pretty real – she draws people in, but sometimes she creeps people out as well!

It’s hard to choose a favourite curiosity in the shop – I do like the masks on the walls, they’re good, and the tarot cards draw people in. There’s a big interest in those. Actually, we’ve got someone coming in next week to do tarot readings – it’s a trial to see if it gets any popularity, but hopefully it’ll become a regular thing here. It suits the decor!