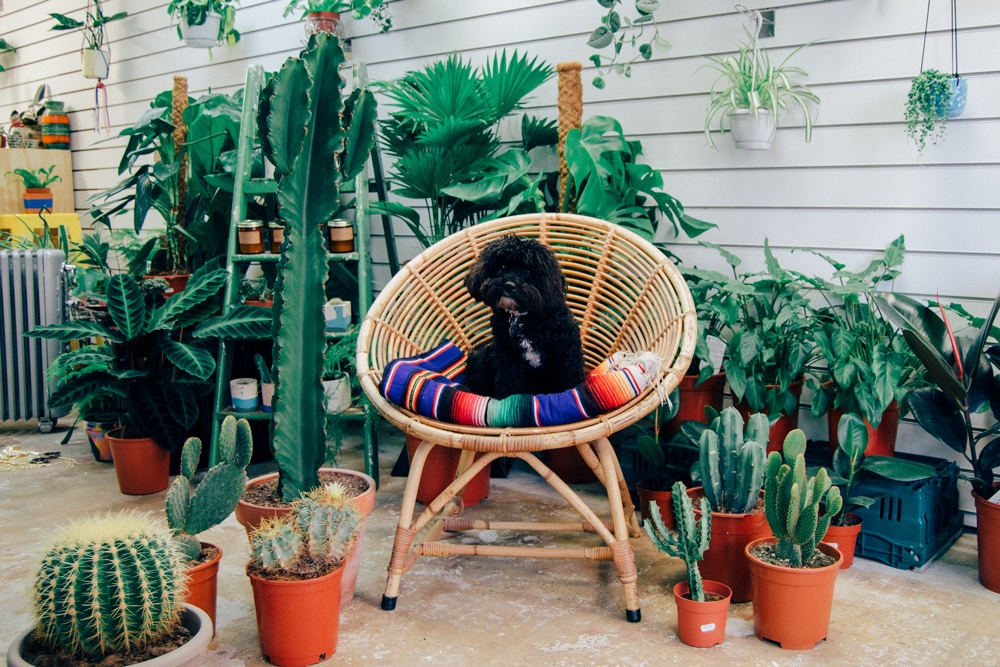 I’ll have been here for three years in June. I moved to Manchester ten years ago. I used to do radio for 6Music, but I gave that up, quite a long time ago now. I was a booking agent for artists, so I was on tour a lot, and I wanted a different lifestyle where I wasn’t away so much. I had a plant shop before this in Cheadle. But this unit came up for sale on the first day I visited the Underbanks, so I rented it! It had a good energy, it felt right.

It’s a nice community here. We’re all on an Instagram group together, where we tell each other what’s going on, if there’s anything up. Strength in numbers! We do stuff together sometimes. A while ago I put on a kind of joint party, with Tom in the record shop next door – he had a party in his shop and I had one here. And there’s the Christmas lights switch-on, I sort of run it, but the other shops do their own things towards it, too. Martin from Rare Mags designed these great stickers for it.

Some plants are easier to keep than you’d think. Not a lot of plants want direct light, a lot of people don’t realise that – lots of plants actually do really well in low light: the Kentia plant, Philodendron Brazil, the Prayer Plant here, or you could try Mother in Law’s Tongue. I’ve got a Jade Plant in my bedroom, that does fine, even without lots of light coming in. That’s one of the plants I really like.

I go through phases with my favourites – right now I love this, it’s a Variegated Monstera. They’re a very rare plant, this one here is worth £250. I’m hoping to propagate from it.

Everyone asks about String Of Pearl plants, everyone loves them, but they are just so difficult to keep, we don’t tend to stock them much – some people come in thinking they’ve killed them, done something wrong, but it’s not that – it’s just a really tricky plant to have. I don’t want to sell someone something that’s not going to last. Sometimes when we order them from Holland, they die on the way here.

A lot of the plants  in the UK shops come from Holland. We don’t really have distributors in the UK, there’s a lack of companies.

That’s Herbie, he’s the shop dog – our mascot. He’s being quiet right now but he has his moments. He pretends he doesn’t like Moomin the shih tzu from SK1, but he does really – I think he’s just playing mind games with him!